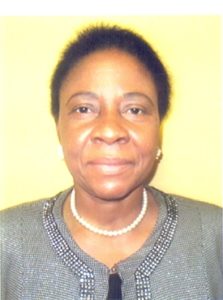 She had her primary school education in Saint Paul’s Primary School Ikaro –Ifon, Ondo State between 1968-1973 and obtained her 1st leaving certificate.

She moved to the prestigious University of Benin, Benin-City, Edo State between 1982 – 1986 where she obtained Degree in Bachelor of Arts (History) 1986. She obtained her Masters in Public Administration in 2004 from University of Ado- Ekiti, Ekiti State, respectively.

Subsequently,she was posted to Eti Osa Local Government in 1990 as head of Planning, Budget and Statistics Department. She initiated the opening of Planning area offices for effective monitoring of revenue and house numbering of the then Elegushi Ajah – Badore Axis until she was moved to Alimosho Local Government and worked between 1990 – 1999, she undertook the house numbering of the LGA.

She was deployed to Apapa Local Government where she served between 1999 – April 2006 as Head of Planning Department in April, 2006.

She succeeded in the take off the EIU. Initiated establishment of a functional Library in MEPB. Registered Lagos state as member of the Nigerian Economic Society (NES), a platform that enables all economist in the State to attend annual conferences

Linked up Lagos State Government with the Korean International Cooperation Association KOICA. Under this platform she attended A-3 week Nigerian Economic Strategy Seminar in South Korea between May -June 2011 opening the door for other MEPB and other LASG staff to attend Seminars in South Korea under the sponsorship of the Cooperation.

December 2011 was deployed to set up the PRS Unit of newly created MEMR where she presently works as the Director (Planning).

She is happily married with children