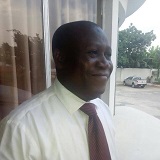 Engineer Odukoya Sesan Moses is an indigene of Ijebu-Imushin, a town in Ogun State, located in Ijebu East of the State Local Government. Born into a Christian home in 1967, Sesan Moses attended, Alafia Primary School, Mokola, Ibadan, Oyo State for the First School Leaving Certificate and later headed for St. Anthony Grammar School, Esure in Ijebu-Imushin where he wrote his West African School Certificate as well as the General Certificate of Education (GCE)

Young Sesan, later proceeded to the popular Obafemi Awolowo University, Ile-Ife, Osun State for the attainment of a B.Sc (Hon) in Chemical Engineering in 1993. He was in the Lagos State University, Ojo, Lagos in 2011 to obtain a Masters Degree (M.Sc) in Public Administration.

After a brief sojourn in private sector for necessary job experience, Engr. Sesan Odukoya was employed by the Lagos State Government in 2000 and deployed to the Ministry of Environment, Office of Drainage Service, as Engineer (wastewater/Drainage) between 2000 and 2008 before becoming the Head, Policy and Planning. He later on assumed the position of Head, Design Project and Implementation (2010 to 2016).

He became the Assistance Director, Oil & Gas Department of Ministry of Energy and Mineral Resources by June 2016. He is now the de-facto Head of the Department following the appointment of the erstwhile HOD, Engr. Ayo Anthonio as the General Manager of the Lagos State Environmental Protection Agency (LASEPA).

Married with children and having Reading and Travelling as major hobbies, Engr. Odukoya Sesan Moses is a Member, Council of Regulation of Engineering, Nigeria (COREN) and the Nigeria Society of Engineers (NSE).